A look at the Senegalese agricultural model: Land practices and territorial specificities of medium and large-scale farms

The food issue related to population growth is at the heart of international sustainable development agendas and feeds the debates on the transitions to be undertaken or supported. Often defined in opposition to an intensive and capitalist agro-industrial pathway, the family farming model, which encompasses a set of farm types and farmers with varied profiles, remains difficult to consider in all its diversity due to its constant evolution. Some phenomena remain little studied, in particular the dynamics of land accumulation on farms identified in some sub-Saharan African countries. Our contribution, based on surveys conducted in Senegal, aims to characterize the profiles and modalities of access to land of 1399 farms, with the highest land concentration. At the scale of different agro-ecological zones, we show that the heads of farms with more than 3 hectares are mostly originating from the locality, cultivate family land and invest in agriculture income from this same activity. On the whole, these farms do not seem to be subject to a gentrification dynamic, characterized by investments by urban and rural elites, often not coming from the agricultural world, and who acquire land with non-agricultural income. With regard to land dynamics, surveys show that the majority of land remains under customary occupation although rural territories are in constant evolution. In a context where public authorities are emphasizing the need for agricultural intensification, through the promotion of private entrepreneurship and the agro-industrial sector, it is crucial to have a good understanding of the diversity of farm forms. This is all the more necessary as a land reform is under way and will help redefine the contours of the agricultural model, between productivity and the demands of sustainability and equity. 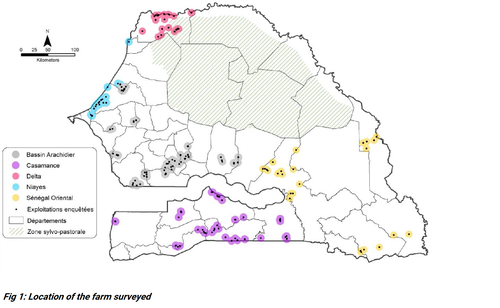