This Land Is My Land! Large-Scale Land Acquisitions and Conflict Events in Sub-Saharan Africa

The paper, which uses Land Matrix data, provides evidence that large-scale land acquisitions in sub-Saharan Africa raise the likelihood of experiencing outbursts of organised violence. This evidence is achieved through a spatially disaggregated approach, to account for local characteristics, and a quasi-experimental research design, implemented to overcome limitations due to missing geo-referenced information about land deals. Domestic acquisitions are particularly significant in explaining organised violence outbreak, suggesting that the national concentration of power among economic elites hinder social stability. Further, the institutional framework, which forms the background for LSLAs, is a prominent determinant of organised violence occurrence. In particular, more egalitarian and inclusive societies are less prone to conflicts, even in the presence of LSLAs. When land deals are finalised to the cultivation of agricultural commodities for biofuels, the effect is less evident and violence partially depends on climate conditions. On the other hand, land deals still in implementation stage seem to narrow organised violence, possibly due to both local control of areas under investments and socio-economic effects of the deals. Results also show the existence of significant spatio-temporal dependence path, since events of organised violence tend to be recurrent and to persist in space, feeding ‘neighbouring’ effects of proximity and local patterns of violence concentration. >>READ MORE 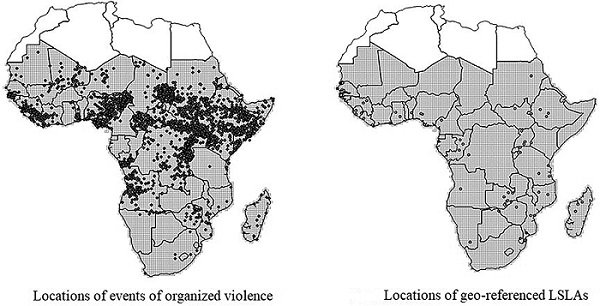