How sustainable land use in Ukraine is ignored

Some Ukrainian agro-companies are contravening the law by illegally operating in protected areas of nature reserves and slopes. At the same time, local authorities continue to make such land privately owned and do not control its use.

These are the conclusions of a study commissioned by Ecoaction entitled Large-scale investments and land use in Ukraine on space images. The territories covered by the study included one land plot in Ivano-Frankivsk and two in Vinnytsia. The findings are alarming: 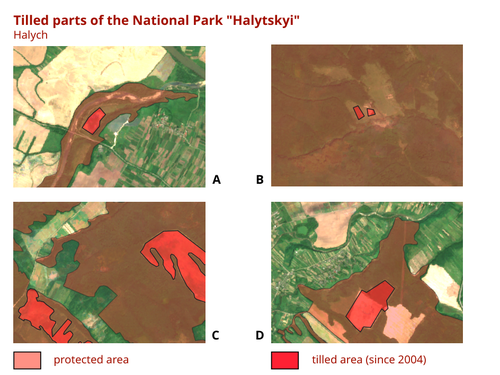 Why is the use of land by nature reserves and slopes a problem?

Natural resources are of particular conservation value, preserving the natural diversity of landscapes, protecting animal and plant life, and ensuring overall ecological balance. However, the local government has leased some of the land to the agricultural companies, which often do not care about the conservation of the land. The intensive use of slope lands also has negative effects on the environment, particularly soil erosion, which washes away the topsoil and results in the loss of its fertility. In addition, the erosion process leads to pesticide residues and mineral fertilisers entering reservoirs and contaminating the water.

How was the study conducted?

In the framework of this study, experts analysed space images of the studied territories using geoinformation technologies (GIS). This methodology can help central and local authorities monitor and control land resources more effectively within a community, district, region, or country. As Mykhailo Amosov, coordinator of the Land Matrix in Ukraine, explains, "In the absence of effective state monitoring and control over land use, the territories of the nature reserve and slope lands are being torn down. Given how detrimental this is to biodiversity and the environment, the state should renew the agricultural inspection or give appropriate authority to the already existing environmental inspection for land use control.”

What could not be analysed?

Due to the fact that the algorithm, which should automatically recognise agricultural crops, lacks validated information about crops over the years, the study failed to determine whether agro-companies adhere to rotation. Furthermore, it was not possible to obtain more information about crops that were previously sown in the analysed territories, as businesses treat such information as confidential.

Nevertheless, the methodology developed will allow Ecoaction to continue monitoring land use in these areas and to gradually reach other regions of the country.